Finally, a report from a fairly recent launch.

For the first time in my four and a half years of flying with WAC, I finally had a free schedule for a June launch that wasn’t either Tripoli-L2+-only or canceled due to fire danger. Because I head off to college in mid-August, Roll Your Own will likely be my last organized launch of 2013, and will definitely be my last WAC launch until FITS 2014. It’s fitting, then, that I finally finished my biggest, baddest project to date in time for this launch.

CLICK HERE TO SEE MY PHOTOS FROM ROLL YOUR OWN 2013 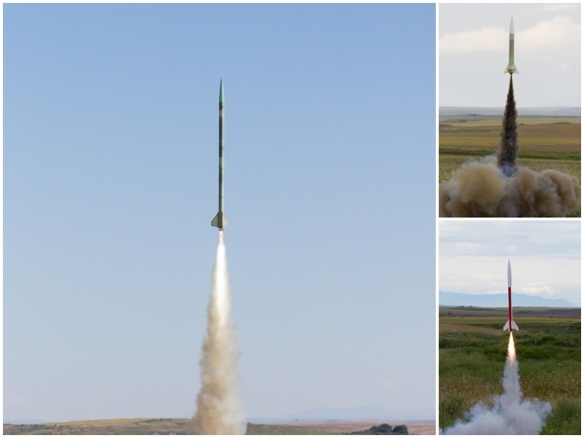 To read a long-winded verbal history of my greatest achievement in rocketry to date, as well as to see photos and videos of my flights at Roll Your Own, click below (reader beware, it’s a bit wordy).

Some time last year, I set the personal goal for myself of sending a rocket past 10,000′ before I started college. After browsing through several kit options, I settled on the 3″ Wildman Dual-Deploy, an all-fiberglass rocket with a 54mm MMT and a warranty promising that it could handle any commercially-produced motor you’re brave enough to fly it on. I took the kit and added an AeroPack 54mm tailcone retainer, and the Golden Eagle was born.

The name “Golden Eagle” is taken from the emblem of my soon-to-be home of Embry-Riddle Aeronautical University. I originally planned a metallic blue and gold paint scheme to match the school colors, but after seeing how well she flew, I’m tempted to give in to superstition and leave her dressed in the lovely pale green of au naturale fiberglass.

I am definitely a flying-oriented rocketeer. I build rockets to achieve specific flight goals, not for the sake of building itself. As such, I often struggle with motivation (I have a simple mid-power balsa fin repair project which has been sitting on my table ready for primer and paint for almost three years). The Golden Eagle certainly wasn’t immune to this struggle. She was originally meant to serve as my L2 rocket and fly at Spring Festivus. When I realized I couldn’t finish in time, that launch (and my L2 with it) was pushed back to AP Checkride. When I still didn’t have her finished, Golden Eagle’s flight was pushed back to FITS 2013, and my L2 was instead accomplished with Same Old Blues.

FITS rolled around, and it was borderline stupid how close I was to getting Golden Eagle airworthy. I was literally one fillet, some bondo, and a couple ground tests away from finishing, but I still wasn’t ready in time for FITS. That meant that its first flight would come at my last possible opportunity to achieve my 10k’ goal before leaving home.

After some fun low-power flying on Friday night, the rest of the launch was dedicated to getting Golden Eagle in the air on a Cesaroni L935 Imax. The L935 is the highest-impulse commercial 54mm motor available today, and RockSIM predicted that it would get the 10lb Golden Eagle to the 11,900′ to 12,000′ range. 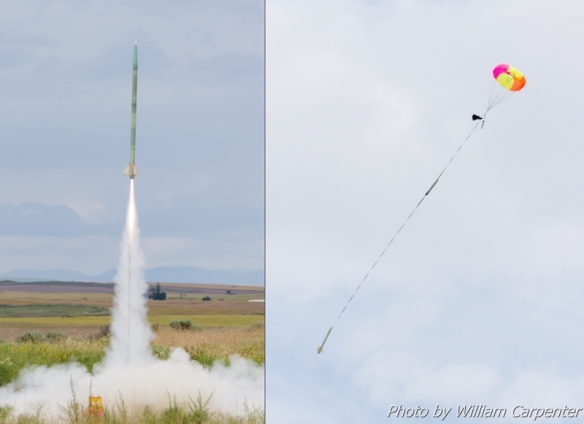 As is visible in the photos, a cloud deck had moved in by that point in the day, and was threatening to curtail my 10k’ attempt. Fortunately, a hole in the clouds was approaching fro the south, so I began prepping the rocket for the L935 flight.

After building the motor, prepping the recovery system, setting up GSE at the away cell (thanks to Mark Lyons for the help), and getting the rocket on the pad, it became apparent that the break in the clouds had moved faster than expected. There was once again a low ceiling over the away cell, and the sound of thunder in the distance confirmed that I would have to wait until the next day for my high-altitude attempt.

Rolling into camp on Sunday Morning, I found mercifully clear skies and light winds. After getting Golden Eagle back into a flight-ready state, I headed out to the away cell once again (thanks again to Mark Lyons for allowing me to drag him out there twice).

The first igniter burned with no effect (only the second time I’ve ever had a Cesaroni motor fail to light on the first try). Thankfully, Daron Johnson had something on hand with a bit more kick, and the second launch attempt saw a small chuff before the motor roared to life. 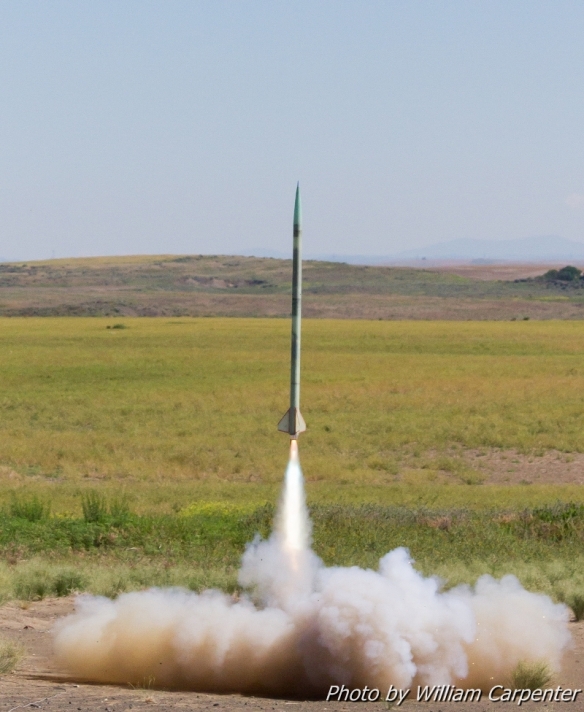 Golden Eagle just after ignition of the mighty L935. 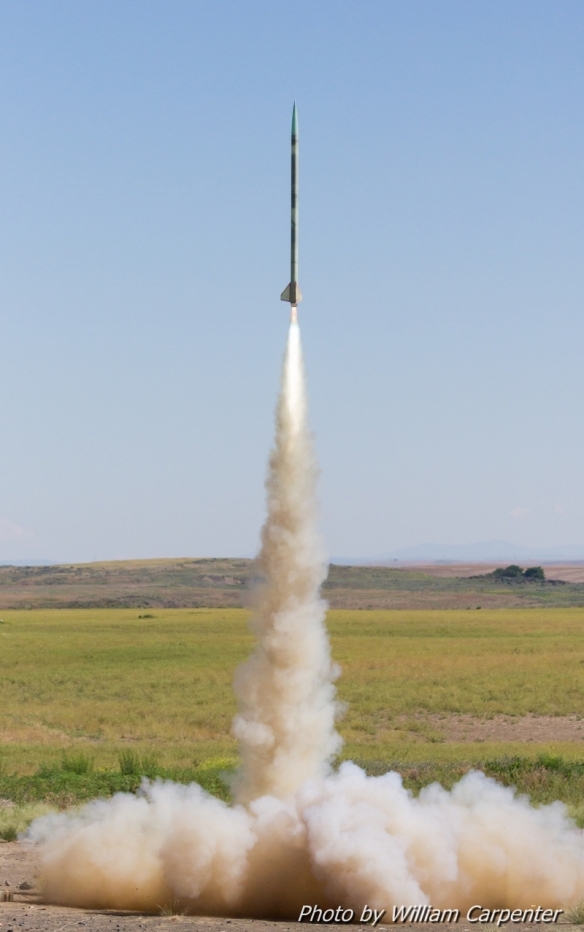 Golden Eagle riding 5′ of flame and 350lbs of thrust.

Over the next 3.4 seconds, the L935 would push Golden Eagle up to a top speed of 875mph. At the launch site’s temperature and the altitude at which peak velocity was reached, that equates to approximately Mach 1.17. Twenty-six seconds after burnout, the rocket reached its peak altitude of 13,747′.

A little over three minutes after launch, I heard the report from the main parachute deployment charge somewhere off to the northeast. Looking in that direction, I spotted the rocket just above the horizon.

The landing site was clearly visible from the away cell. GPS data from the BRB 900 put the rocket about a mile away from the launch pad. The rocket was easily retrieved after a bit of a drive and an easy quarter-mile walk into a cleared section. 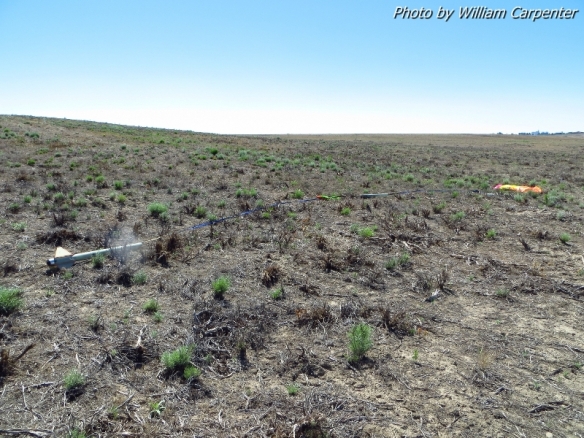 Not a bad last hurrah if I say so myself.

I’d like to end what is by far the longest post on this website with a big thanks to every member of WAC who has helped me over the last four and a half years. Every piece of advice, every spare igniter, and every helping hand got me to where I am today, and I am truly grateful.